It didn’t take me too long at all to figure out that riding alongside of my partner while he drove a mammoth size US Xpress company 18 wheeler was a privilege, and not a right. From the first time I grabbed onto those handrails and pulled myself aboard my new “house”, I knew right then and there that my place in the passenger seat was a deserved place, and my mission was to be seen and not heard! Not that David and I couldn’t talk whenever we wanted to, but I soon realized the enormous responsibility on him. His undivided attention to everything around him was priority. He had his hands full as well as his mind full. If I could find a place at his side to make his life easier for him, then I had a purpose aboard that truck besides sitting there and looking cute.

Prior to moving into my new “house”, I had scrounged around over the Internet and on bookstore shelves seeking information on what life on the road was like, particularly for truck drivers and their riders. There were books about RVing and camping, but next to nothing about life on the road with a trucker. Then I came across one on the Internet, and had to have it. “The Truth About Trucking”, by Steve Zellers, who was himself a trucker and like me, loved to write. I read it cover to cover the day it arrived. He wrote about his experiences as a truck driver and what life on the road was like. That gave me a sort of primer about what I could expect out there, but I still didn’t have a clue about what I should bring with me. So like a girl, I decided to bring everything that I thought would make me more comfortable. Now remember, I’m a girl.

Makeup and jewelry take up space. And just who am I going to impress in a truck stop anyway? David’s too busy driving to look at me anyway, so all of the fun little girly things that I tucked away in corners never saw the light of day. Rule number one: forget the makeup and jewelry — he likes you just the way you are! Besides, it’s safer that way! Although in a sense you are going out to dinner nearly every night of the week, there is no need for makeup and jewelry! Glancing around at the rest of the truckers and their partners while eating Country Pride and Iron Skillet cuisine, I found putting on makeup and wearing jewelry would only draw attention to me, and somebody could mistake me as a lot lizard! It was lot lizards who wore makeup and jewelry, and unless I was going to cause a little friction between me and my partner, I wasn’t about to wear it. I remained a plain Jane for the sake of self protection. Now on to more materialism…

There’s just not enough room on an 18 wheeler for a desktop computer, monitor, and all of the computer peripherals that go with it. We didn’t have enough money for a laptop and I wasn’t about to invest in one when I already have a computer. Big mistake. Even though our truck was one of the top of the line Volvos known for their comfort and luxury with tons of storage space, there is just no place for a desktop computer. Rule number two: leave your desktop computer at home — it’s a space hog. Not only that it is prone to injury by getting jostled around during trailer hookups and axle slides. My big 19 inch flat screen LCD monitor has a mortal wound on its surface as a testament to that. We now have a laptop. yusen logistics

If you’re a girl, you think you have to bring your whole closet and your dresser too! Let me tell you ladies, don’t. Limit it — you don’t need to have your Sunday best with you, nor do you need an outfit for every day of the week. I had two outfits for every day of the week and then some. I had dress shoes, dresses, dress pants and dress blouses. When I found myself wearing the same pair of jeans for three days and, I began to reorganize what I had inside the truck and tucked it underneath in duffel bags in the side compartments. Before I knew it, David’s tools and equipment that he needed for various trucking issues were cumbersome for him to get to because my crap blocked it. After about six months I loaded two huge boxes of unnecessary mess that never should have been aboard our house on wheels in the first place. Rule number three: keep it light — pretend you are going on a weekend camping trip. You don’t need to change into clean clothes every day. You don’t get dirty in the first place. You are just along for the ride, and your job is keeping house…speaking of which, don’t forget your cleaning supplies. 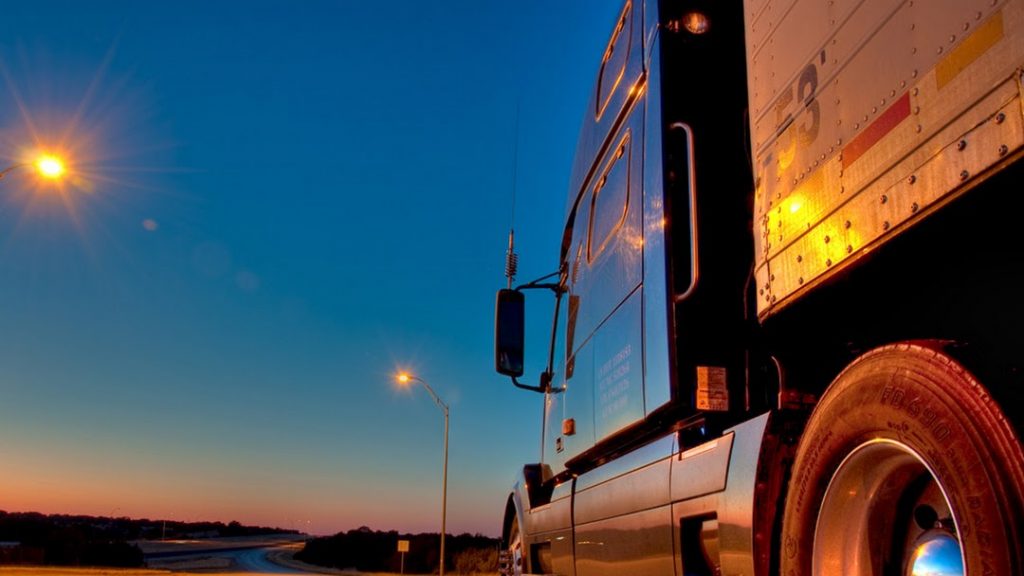 David’s job was to drive — my job was to make his life easier. Organization and order are essential to comfortable living, unless you like stepping over piles of dirty clothes, books, papers, lighters, cups and bottles, food wrappers, CD cases, cigarette packs, and God only knows what else– and like it! ! Keeping clutter organized helps the driver feel more organized and since his hands are on the wheel your hands can arrange and decorate the inside of the truck to become functional and orderly. One of the first things I did for Dave was bought him an elongated container to put all of this important papers and documents in which made them easily accessible at his side. There he kept his logbook, current bill of lading, Atlas, calculator, and other essentials, like backup packs of cigarettes and even snacks if he wanted some. All dirty laundry was kept in a vinyl bag and stuffed into a hideaway cubby. Books were stored in an orderly manner in cabinets along with any CDs that we had. There was a trash basket directly behind my seat where we could easily reach back and dispose of unwanted items. I kept a bottle Windex on hand and lots of Clorox wipes.

A note of warning — Velcro is addictive. Velcro on the dashboard for lighters and cell phones and pens. I put Velcro on strategic places to keep items from flying and sliding. I even tried to hang David’s reading glasses on Velcro but he wouldn’t let me! Rule number four: clean the clutter. A cluttered house is a reflection of a cluttered mind and who has a cluttered mind living such a simple beautiful life on the road? If you got mental clutter, leave it at home — if you have one.

You know, two people have to like each other a lot to coexist comfortably in a tiny handful of space and not want to kill each other every day! As a passenger along for the ride, you must remember that you went to work with your partner that day. Always remember that he invited you to his job, and it is not your place to tell him who, what, when, where or how, to do anything relating to his job. His dispatcher does a pretty good job of that already, and the last thing he needs is a passenger interjecting anymore complication into his already busy mind. A driver’s mind never rests, his eyes move from mirror to mirror, his ears listen even through the radio for variances in the day-to-day ordinary sounds for something out of the ordinary. His mind doesn’t rest — and you better hope to God that it doesn’t. While he’s working, read, sleep, dream, meditate, build on your own inner castle and become self absorbed. You couldn’t give a better gift to your partner than by fully allowing him to perform his job duties unhampered by you, so that he can navigate that rig with the highest of skill. Remember: your life is in his hands just as much as those four wheelers passing him by and flipping him off. His training has taught him skills and patience that far surpass what the common driver on the interstate could ever know unless they themselves got their CDL and climbed aboard a big rig of their own.

There were times that I would kneel beside David and feed him while he drove. There are times that I would rub his aching arms and shoulders from his having to wrestle his rig from heavy wind to keep it steady on mountain roads. Not once did I flinch when he asked me to get something for him or to do anything that made his life easier. The appreciation in his eyes was all I needed to further motivate me to make his life easier. After all, it was a privilege to be on the road in a company truck and experiencing a full life of freedom and adventure every day. At night falling asleep came fast, and when it came time to come off the truck and make room for new trainees for David to take on the road with him, I looked at him and wonderment and said to him “Honey, I need someone to shake the bed and make motor noises for me at night!” He just laughed and said that he understood. I still miss those motor noises — the soft warm rumble of that big diesel engine. I’m keeping my rider papers active and when David decides that he has trained enough new students, I’m climbing back on board.

Small business use when getting started on the internet